112 Visualizações
admin
(from Ford Press Release) Ford Sets World Record for Biggest Hot Wheels Car Track Loop in Support of Take Your Child to Work Day
-To help children cultivate an interest in science and engineering, Ford attempted to set a new world record for building the largest Hot Wheels® car track loop as part of this year’s Take Your Child to Work Day
-Ford Mustang Hot Wheels car started at more than three stories high inside Ford Research and Innovation Center
-Old record loop stood at nine feet, nine inches tall
DEARBORN, Mich., April 23, 2015 – Ford ran circles around the old Hot Wheels® record loop as part of this year’s Take Your Child to Work Day. When the effort was complete, Ford had made a world record attempt with a Hot Wheels car track loop that exceeded 12 feet tall.
The world record attempt was the brainchild of Ford dynamometer technician Matt West, who had built increasingly large Hot Wheels loops with his six-year-old son Blade at their home in Monroe, Michigan.
The attempt took place in the three-story atrium of the company’s Research and Innovation Center in Dearborn in support of Ford’s participation in national Take Your Child to Work Day.
“It started as part-fun, part-physics lesson with my son at home,” said West. “We built one in our playroom, and then built a five-foot-tall loop in our backyard. When people at Ford heard what we were up to, everyone thought it would be a great way to get young people excited about science and engineering by trying to break the world record on Take Your Child to Work Day.”
The current record of nine feet, nine inches tall was set in Ohio. West and his friends at Ford successfully made a Mustang Hot Wheels car complete a 12-foot, six-inch loop.
“On a track, a Hot Wheels car can only go so fast, so carrying the momentum of the vehicle through an entire loop is harder than you might think,” said West. “In a world where kids are inundated with TVs and tablets, I thought teaching my son with actual moving vehicle models would be so much more rewarding, and then it took on a life of its own.”
Early on, West and Blade went to work dreaming up the world record-breaking loop. With the help of others at Ford, including John Jaranson, technical expert in interior systems, and Grant Compton, computer-aided design engineer, they created the loop using computer-aided design software called CATIA, which is often used for car design.
Knowing they had to create the super structure out of four-by-eight-foot sheets of plywood, they designed the loop into sections that would get bolted together.
Once designed, the team enlisted the help of Will Brick, general manager of TechShop Detroit, a membership-based, do-it-yourself workshop and fabrication studio, to bring the digital design files to life. Jaranson is a member of TechShop, thanks to Ford’s innovative relationship with the company, a part-time instructor who helps other members utilize the available tools. The team cut the sheets of plywood using a water jet cutter.
“At TechShop, we like to say, ‘Build your dreams here,’” said Brick. “It was great to help Matt and to work with the Ford team to bring his son’s idea to reality.”
“It’s an honor for Hot Wheels to have inspired Matt West and the Ford team to embark on such an epic world record attempt,” said Chris Down, senior vice president and general manager, Hot Wheels. “Ford and Mattel have a history going back more than four decades. We both have tremendous passion for pushing the limits of design, and we’re happy to be involved in trying to generate enthusiasm for science and technology for kids everywhere.”
With its signature 1:64-scale models, Hot Wheels has created hundreds of Ford Motor Company vehicles, including many of the original 16 Hot Wheels models released in 1968 – a custom Mustang, Thunderbird and Cougar.
Find us on
Royalty Free Music by
Sound Effects by 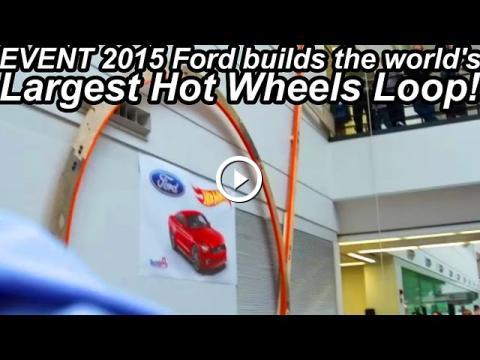