Can You Swim in Shade Balls?

68 Visualizações
admin
I bought 10,000 shade balls and tried to swim in them. They appear to act like a non-Newtonian fluid: rigid under high shear stress, but they flow like a liquid under low shear.
Get a signed shade ball by supporting Veritasium:
Receiving a shade ball:
1. Support Veritasium on any Patreon tier and enter your address
2. In about a week I will start sending out signed shade balls
3. I will cover all shipping costs but if things get really crazy I will prioritize existing Patreon supporters, higher tiers and US-based supporters (because shipping is a lot cheaper)
My sense was that swimming in shade balls would be difficult but still doable. This was roughly true for the single layer of shade balls. The shade balls slide past each other so they act like a liquid, albeit a viscous one owing to their significant inertia. It's much more intense exercise and it's also annoying to be bombarded with shade balls on all sides of your body, particularly your head. With multi-layer shade balls (as exists on much of LA reservoir) things get significantly more difficult. The balls bunch together and when you try to move through them quickly, they become more rigid, providing significant resistance to motion. This has the benefit that you can lie on them and as long as they stay trapped under you, you can float on them. But a little bit of motion causes them to move around and you sink through quickly.
Huge thanks to:
Jordan Schnabel and Cristian Carretero for filming and swimming and providing lifeguard services.
Raquel Nuno for filming and putting up with me.
Special thanks to Patreon supporters:
Donal Botkin, Michael Krugman, Ron Neal, Stan Presolski, Terrance Shepherd, Penward Rhyme and everyone who provided feedback on an early draft of this video.
Music from "Dubstep Mammoth 2" "Finally Here (Instrumental)" "The Last Arrival" "Sundown Love (Instrumental)"

Can You Swim in Shade Balls? 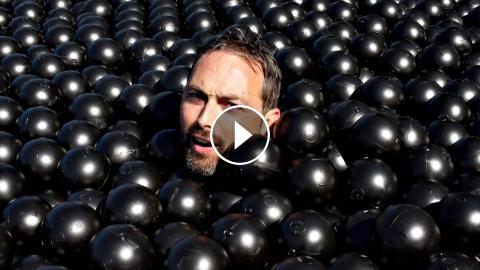 I bought 10,000 shade balls and tried to swim in them. They appear to act like a non-Newtonian fluid: rigid under high shear stress, but they flow lik...