585 Visualizações
admin
(from Audi Press Release) No model with the four rings is closer to motorsport, none is more striking and more dynamic: at the 2015 Geneva Motor Show, Audi is presenting the second generation of its high-performance R8 sports car. The V10 mid-engine and a newly developed quattro drive ensure breathtaking driving performance, especially in the top-of-the-range version with 449 kW (610 hp): achieving 0 to 100 km/h (62.1 mph) in just 3.2 seconds, its top speed is 330 km/h (205.1 mph).
A high-revving mid-engine with superior performance, a consistently lightweight construction concept and an extremely dynamic chassis with quattro drive system and fully variable torque control - this is what makes the R8 the sporty spearhead of Audi. The high-performance sports car has been newly developed from the ground up - it is more taut, more striking and more fascinating both on the race track and on the road.
"Motorsport is in Audi's genes, it has always been a permanent feature of our brand's character," says Prof. Dr. Ulrich Hackenberg, Board Member for Technical Development at Audi. "With the new Audi R8, our engineers are bringing accumulated racing expertise from the race track onto the road. No other model of ours evokes more dynamic emotion. The new R8 V10 plus is therefore the most powerful and fastest series-production Audi of all time." Thanks to the close cooperation between racing engineers, racing drivers and developers, the Audi R8 has seen a clear performance increase - this benefits both the series production car and the R8 LMS developed on the basis of this.
The engines: 10 cylinders in two versions
The 5.2 FSI is available in two versions: one with 397 kW (540 hp) and another sporting 449 kW (610 hp). The range-topping model accelerates in a mere 3.2 seconds from 0 to 100 km/h (62.1 mph) and keeps going to its maximum speed of 330 km/h (205.1 mph). The sound of the freely aspirated V10 engine, whose maximum torque is available at 6,500 rpm, has become even fuller and sharper. A 7-speed S tronic transmission and a newly developed quattro drive system transmit the power to the road. The distribution of the drive torque adapts to the respective driving conditions - in extreme cases, 100 percent of the torque can be transmitted to the front or rear axle. The new performance mode in the Audi drive select dynamic handling system enables adaptation of the most important ride dynamics parameters to the friction coefficient of the road.
Lightweight construction: only 1,454 kg (3,205.5 lb) dry weight
The top model R8 V10 plus has a dry weight of 1,454 kilograms (3,205.5 lb). Despite a lot of extra equipment and greater rigidity, the new Audi R8 weighs up to 50 kilograms (110.2 lb) less than its predecessor. The multimaterial Audi Space Frame (ASF) ensures low weight and optimum axle load distribution. The combination of aluminum and carbon fiber reinforced plastics (CFRP) in the Audi Space Frame opens up new dimensions with regard to weight, rigidity and crash behavior. The aerodynamic underbody which integrates a long diffuser boosts downforce. The chassis, too, with its double wishbone suspension demonstrates how close the new Audi R8 is to motorsport.
Design: flat, wide, muscular
The design reflects the powerful sporty character of the R8. A visual distinguishing feature which also provides enhanced safety comes in the form of the standard LED headlights. For an extended field of vision and more brightness, Audi offers the laser spot for the high beam as an option - complemented by the dynamic turn signals at the front. Dynamic turn signals are standard at the rear.
In the new Audi virtual cockpit, the displays are digital. The most important controls are grouped together in button clusters on the steering wheel, also known as satellites. In the interior, the driver has the impression of sitting in a race car. The air conditioning controls emphasize the simplicity of the control panel with its floating effect. MMI navigation plus with MMI touch is standard.
Sales of the new Audi R8 start in summer 2015. Prices are 165,000 euros for the R8 V10 and 187,400 euros for the top-of-the-range version R8 V10 plus.
New factory for quattro GmbH: production at the "Böllinger Höfe" site
The new Audi R8 is produced at a new quattro GmbH production site that was specially built for the sports car - the "Böllinger Höfe" site in Heilbronn. An elaborate manufacturing technique ensures that Audi-typical quality is produced.
Find us on
Royalty Free Music by
Sound Effects by 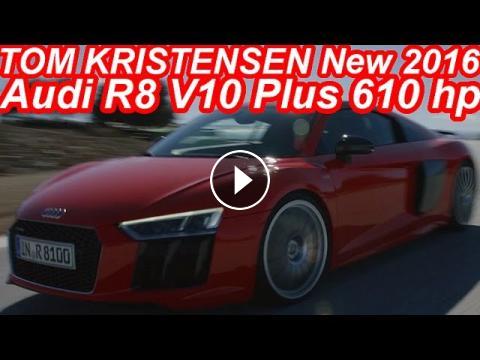 (from Audi Press Release) No model with the four rings is closer to motorsport, none is more striking and more dynamic: at the 2015 Geneva Motor Show,...