101 Visualizações
admin
Seven years after the birth of the Audi A5 Sportback, the new version now makes its appearance. The five-door coupé blends elegant, emotional design with high functionality and abundant interior comfort. The family-friendly car is perfectly connected and offers the latest infotainment features. Plus, the second generation comes with a completely reengineered suspension, high-performance drives and innovative driver assistance systems. The S5 takes to the road with a new six-cylinder turbo engine developing a mighty 354 hp and 500 Nm (368.8 lb-ft). In a new departure, the A5 Sportback is also available as a bivalent g-tron, which customers can run on either Audi e-gas, natural gas or gasoline.
Exterior design
4,733 millimeters (186.3 in) in length, a 2,824 millimeter (111.2 in) wheelbase, 1,843 millimeters (72.6 mm) wide and 1,386 millimeters (54.6 in) high - the new Audi A5 Sportback displays sporty, balanced proportions. Audi's designers have combined dramatic shapes and athletically taut surfaces in the design of the five-door coupé. The stretched wheelbase, the short overhangs and the long, wraparound front lid with power dome emphasize the model's dynamism.
Another distinguishing feature of the new A5 Sportback is the sporty front end. The three-dimensionally modeled Singleframe grille is significantly flatter and wider than on the previous model. Depending on specification, the radiator grille comes in subtle black matt. On the sport trim line its basic color is twilight gray matt with horizontal slats in aluminum silver matt. In the design trim line it is in elegant dark titanium black with horizontal slats in chrome. The side air intakes have bold edges and optionally - with the S line exterior package - honeycomb grilles and a sporty, horizontal trim strip in aluminum silver matt extending across the entire front end.
Audi A5 Sportback (2017)
2017 Audi A5 Sportback
Side view
The wave-pattern shoulder line imparts the Audi A5 Sportback with emotional elegance. The characteristic design feature, already present on the previous model, is now even more striking with its three-dimensional character. The interplay of light and shadow becomes all the more alluring. The long sweeping wave with the pronounced bulges over the wheel arches underscores the quattro DNA. At the transition from the front wheel arches to the doors, a three-dimensional chrome trim element highlights the sporty ambitions of the new A5. From the A-pillar, which has been shifted far to the rear, the roof extends over the athletic body with its frameless doors as a flat, flowing dome. The front and rear side windows are given emphasis by a trim strip in aluminum silver, matt.
Rear body
The rear end exhibits clearly horizontal and three-dimensional styling. The stretched luggage compartment lid in aluminum terminates with a striking spoiler edge that also enhances the aerodynamics. Separate reflectors in the lower section of the rear apron, which is painted in the body color, emphasize the width.
The slim, three-dimensionally shaped rear lights come in LED technology as standard, and an LED lighting signature underlines their sculptural geometry. The delicate brake light sits below the luminaries, and the dynamic turn signal (with LED headlights and higher) forms a precise strip in the upper section. The third delicate brake light on the upper edge of the rear window spans its entire width.
Lighting technology
The finely contoured headlights in the new Audi A5 Sportback harmonize perfectly with the horizontal lines of the front end. They are positioned slightly above the top edge of the Singleframe grille, which is drawn down quite far - a surprising design detail and a first in the A5 model line.
With the options LED headlights and Audi Matrix LED headlights, LED technology is used for all lighting functions. The new lighting signature of the Audi Matrix LED headlights creates a characteristic, focused four-eye face reminiscent of the Ur-quattro.
18 LEDs shine through two lenses to produce the high beam of the Matrix LED headlights. Provided with information from the camera on the interior mirror, the LED control unit switches them on individually or dims them in 64 stages as necessary. This enables the Matrix LED headlights to produce several million light distribution variants. They always illuminate the road optimally with a quality of light similar to daylight, without dazzling other road users. To prevent the driver from being blinded by glare from highly reflective traffic signs, these are specifically illuminated with reduced power.
SUBSCRIBE!
FACEBOOK
BLOG
Royalty Free Music by
Sound Effects by 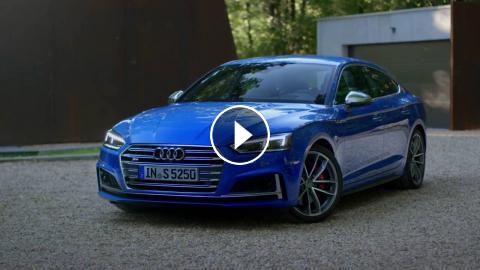 Seven years after the birth of the Audi A5 Sportback, the new version now makes its appearance. The five-door coupé blends elegant, emotional design w...